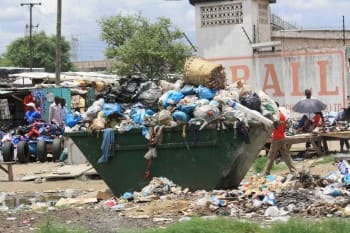 In an interview with the Lusaka star, LCC Public Relations Manager Haabenzu Mulunda said members of various communities should ensure their surroundings are clean to avoid outbreak of diseases at the onset of the rain season.

Mr. Mulunda said LCC cannot manage to collect garbage effectively in all parts of the city due to financial constraints.

“Garbage collection is costly because it is not budgeted for. As such, the council will only collect garbage when resources are available. This is why we have contracted other people such as the Community Based Enterprise to help us,"

"Communities that want their garabage collected  should subscribe," he said.

Mr Mulunda also appealed to the public to be vigilant when it comes to environmental maintenance.

“Who is throwing that garbage? It is the same people complaining about accumulating garbage in the city. Waste does not generate itself. If you see your neighbor throwing waste on the road, drainage or open space, take action! That behaviour is uncalled for,” he stated.

Meanwhile, the Lusaka Water and Sewerage Company (LWSC) has assured its customers that water being supplied by the utility company is safe for human consumption.

LWSC Public Relations Officer Topsy Sikalinda told the Lusaka Star that the garbage in the surroundings does not contaminate their water.

“As a matter of fact, LWSC was awarded as the best water utility company in the country this year. As long as residents are getting water from LWSC, there is no need to add any chemicals to treat the water,”

Mr Sikalinda ,however, acknowledged that water may get contaminated depending on how particular individuals handle it.

Recently, residents in most parts of Lusaka raised concerns regarding the accumulation of garbage which they feared would compromise the quality of water being supplied.