The myth of the faceless UNZA graduate statue 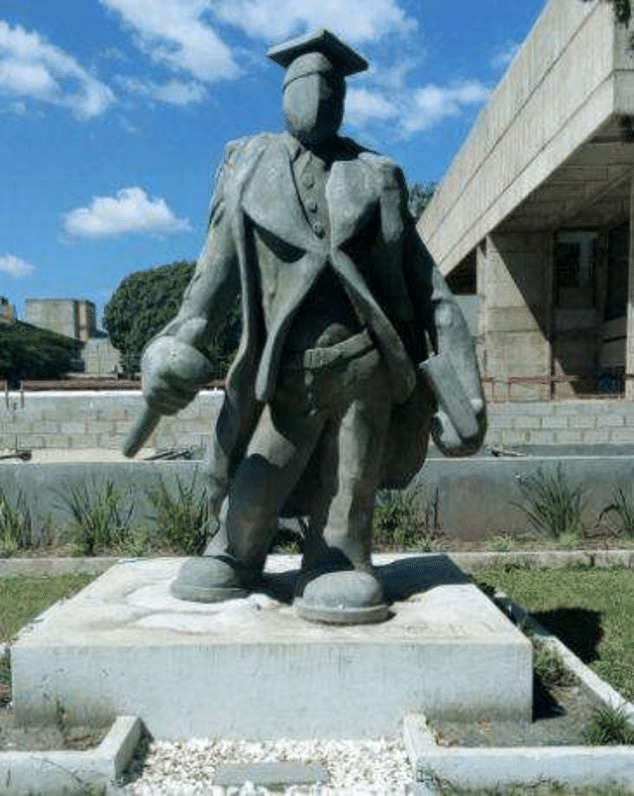 The University of Zambia (UNZA) has long been seen as a citadel of academic thought and logical discourse. Despite UNZA’s chequered history of student riots and strikes, its prestigious walls have produced intellectual minds that have greatly impacted both Zambia and the African continent.

Considering UNZA is one of the premier reservoirs of the intelligentsia in Zambia, it is shocking that students harbour an idea that taking a picture beside the faceless UNZA statue at the Great East Road Campus will result in one failing to graduate.

For those wondering, the faceless statue is not by any chance an offshoot of Professor Nkandu Luo’s proposed intangible Cultural heritage degree programme. It is in fact a monument erected to embody intellectualism.

The late famous UNZA lecturer and artiste, Henry Tayali, erected the statue, which is a depiction of a graduating student, in 1967.It has no facial features, has a book in its left hand and a hoe in the right hand.

UNZA Historian Professor Bizeck Phiri says the faceless UNZA statue was deliberately erected between the Graduation Square and UNZA Library in order to motivate students to graduate, this is in contrast to its current association with failure.

”The statue symbolises graduation, that is why graduates in their academic attire go and stand by the statue in order to show that they have achieved the purpose of University, which is to graduate students.’’

The UNZA historian is of the view that the myth surrounding the faceless statue should be dismissed as he has never come across a student who failed their examinations at UNZA because they took a picture at the statue.

Apart from orienting first year students about the different programmes, activities and facilitiesat UNZA, returning students also admonish first years not to take pictures at the statue if they are to proceed to second year. Unfortunately, first years at UNZA, fuelled by their weak scholarly virility, believe this myth without question.

”When I first came to UNZA in 2018 as a first year, senior students told me that if I take a picture at the UNZA statue, I will fail and go back home. Surprisingly, I saw someone who took a picture at the statue go home, though I do not know if it is because of the statue or they were not just studying hard,’’ says Thomas Mugala, a graduate.

Meanwhile, Jack Ng’uni, a first year student, notes that the myth surrounding the UNZA statue has created fear such that he avoids taking pictures in areas near the statue.

” A first year student posted a picture of himself near the statue and a lot of people on Facebook were commenting that he will fail as no first year should take a picture at the statue. Because I do not want to fail and go home, the Facebook comments have made me avoid the statue by all means,’’ Ng’uni adds.

Despite the ignorance by some students about the UNZA statue being way stronger than their academic exposure, students have to still be exposed to facts that a harmless statue has nothing to do with their failure.

UNZA students should therefore abandon their perception of the UNZA statue, and instead, feel inspired by the statue as it embodies progressive values that the university is envisioned to uphold.

A room lit with an expensive perfume engraved with the mark of intense excitement. A bouquet of red roses with a scent that stirs up...