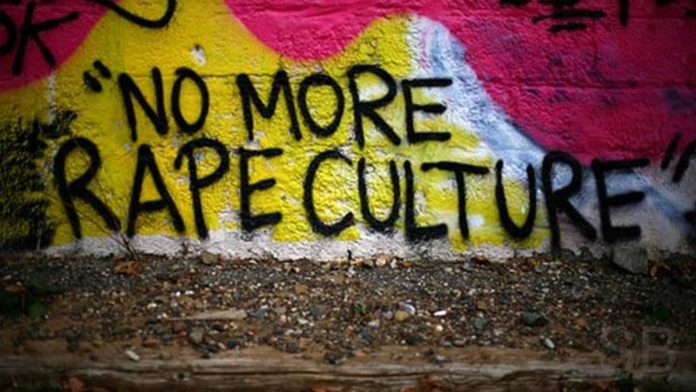 Before we fully evolve to a ‘No rape’ society, we must first acknowledge that many are unaware of what constitutes rape. There are many who are perpetrators and many have fallen victim without knowing it. It is imperative that we educate people on how this applies, what it is in all forms, and how they can be found guilty in relation to their sexual activities.

Rape is not just forcing yourself on someone like we all see it but it includes; persuading someone to have sexual intercourse even when they don’t want, having sex with someone under false pretenses.

Rape culture in a simple definition are behavioral patterns that can be seen from either males or females that enable them to get away with acts of harassment and sexual abuse simply because they have been trivialized with traces of entitlement from both parties.

It is no secret that when boys are growing up, they are taught that women are at their disposal and theirs for the taking. They are taught that if the woman you want says no, it means yes and you must continue to pursue. On the other hand, women are taught to say yes, even when they don’t want to because a man is seen to be superior and must be respected.

There is need to have a mind shift in viewing these issues. Men must learn to respect women and their decisions and women must stand by their word regardless of how the man will feel. Sex with consent is the most refreshing thing two people can partake in because no-one was forced into doing something they didn’t want to.

Unfortunately, we are living in a society where one must constantly do the chasing until one concedes and they only do so to stop the nagging and pressure. An example of rape culture is a woman visiting a male friend’s house and she is expected to bow down to whatever the man will say in order for her to get a lift back home in the event that she stays quite far. It has been normalized in our society such that every act should be exchanged in kind. So many unhealthy relationships that only exist if one is giving in and another is taking. This is not to say that women are saints because they do this too, to children and young men too.

Rape has various effects and some of them are:

5.Self harm and Suicide

8. They become the perpetrator

Consequently, it is important that both men and women add their voices to encourage survivors to speak out on their experience. It paves the way for all of us to do the same. Speaking about a problem is a start to healing. This is because when you speak, you will realize that many people are and have gone through the exact same thing as you. Speaking out also brings awareness to people who may have not known that what they did or went through is wrong and should be corrected. The #MeToo global movement has given room for sexual assault victims to speak out and this indicates to all of us that many have been assaulted.

The environment now is way more accommodating that it was a few years ago for survivors because there is a lot of help and support that has been put in place to speak about these issues without judgement. There is need for more coverage on these problems in our society. The numbers are rising and it should be declared a national emergency.

The narrative has changed towards rape culture, people are owning their voices and taking the fight against rape. And it is the duty of us all whether assaulted or not to take the stand and fight alongside each other.

But most importantly, let us stop seeing people as objects to satisfy our pleasure and view them as humans that deserve the same security and freedom as ourselves.

This service can be accessed by anyone who has an MTN sim card, possesses a National Registration card and is registered for mobile money...