Lusaka StarService with Excellence
HomeEntertainmentAfrica Directions calls on govt to set up recreational centres to keep... 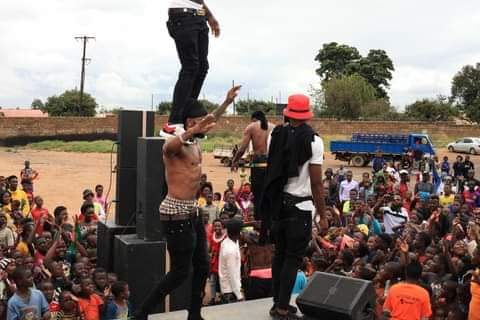 Kamulanga Ground in Jack Compound, Lusaka, was a host to a hive of activity on Saturday as Africa Directions held a youth musical bash to raise awareness on safe abortion.

The bash was characterised by musical performances from artistes, Chanda na Kay, Dalisoul, Willz, among others.

In an interview with Lusaka Star, Africa Directions Executive Director Mark Chilongu said the campaign to raise awareness on abortion is aimed at supplementing government’s efforts in spreading information on the legality of safe abortion in Zambia.

“Our aim is to supplement government effort as some people still think that aborting is illegal, which is actually not the case,” said Chilongu.

He said that his organisation has observed that there has been alot of unsafe abortion in the country, hence, the need to sensitize young people in the community on safe abortion.

“We want inculcate knowledge in the young people that will make them feel safe to go and access the services at the hospital, as many of them are not comfortable to talk to health personnel. Communities should not induce young people into use of traditional medicine as it may endanger the life of the victim,” the Executive Director noted.

Chilongu stressed that despite abortion being allowed in the country, young people should still use contraception to prevent unwanted pregnancies.

The Africa Directions executive director further called on government to set up recreational centres in compounds in order to keep youths away from vices such as sex.

“Government should consider having alot of recreational centres around the compounds which will keep the young people off early Sex and drug abuse as they will have activities to engage in,” he said.

Meanwhile, Mary Daka, a youth from Jack compound, said that abortion at hospitals should not have a long process as that will discourage young people from visiting health facilities.

If all members of staff work together they can keep the institution clean. In line with the University of Zambia (UNZA) core values of...