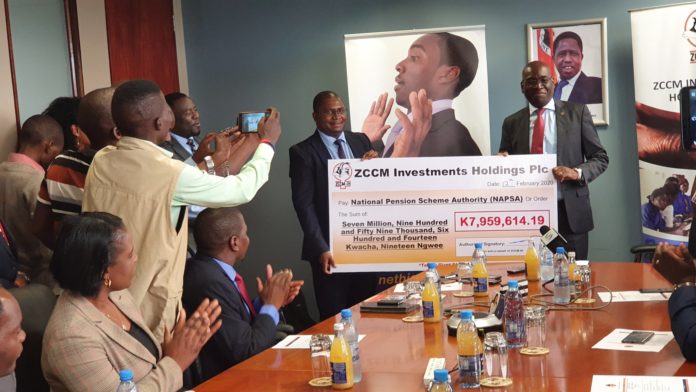 He said the Company’s strategic plan is underpinned by a transformative investment agenda aimed at driving sustainable growth for the benefit of all stakeholders.

This Fourth dividend cheque is a demonstration of our commitment to our shareholders for them to get a return on their investment in ZCCM-IH.

Mr Chipata disclosed that the company is widening its footprints in the mining sector by developing new product lines such as Manganese in Central Province, Gold processing in Rufunsa, Mumbwa and Mwiinilunga.

He added that ZCCM-IH is focused on generating consistent and predictable income through investment in brownfield and Greenfield projects while ensuring and maximizing value for its stakeholders.

Meanwhile, NAPSA Director General Yollard Kachinda said the Authority has a fiduciary responsibility to safeguard and grow the members’ funds by engaging in viable investment projects.

He said the Authority will always invest and grow funds in a transparent and prudent manner which will result in a financially sustainable scheme.

NAPSA is one of ZCCM-IH’s key shareholders with a 15% stake and has received approximately 64 Million Kwacha of dividends since 2014.