Lusaka StarService with Excellence
HomeFeaturesIs a degree still worth it?

Is a degree still worth it? 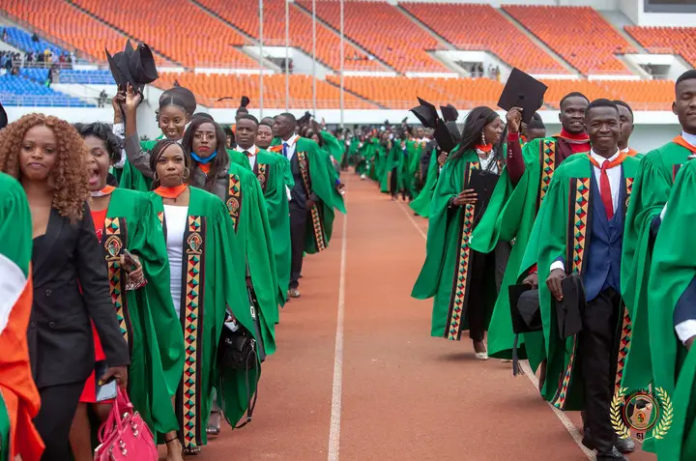 For a majority of graduates, getting employed after graduating is the ultimate goal. They spend 12 years in primary and secondary school and an additional four years in university or college with the plan of getting a well paying job in their field of study. However, reality presents a different scenario.

According to the World Bank, the unemployment rate in the country stood at 13.03 percent in December 2021, a clear indication that jobs are scarce and the chances of a fresh graduate getting employed with little to no experience are slim.

In April this year, over 6000 students graduated from the University of Zambia (UNZA) alone. These graduates have potentially joined the over 27 percent of unemployed youths in the country.

34 year old Kayimbo Katengo, a bachelor’s degree graduate in Development Studies from UNZA, is one of the many graduates that has had to deal with the harsh reality of being unable to find a job after graduating, worse, from the highest learning institution in the country.

“After my graduation in 2012, all I wanted was a job. I had a qualification and I hoped it would get me employed. However, I never heard back from any of the job applications I made. It was very frustrating for me,” he said.

He narrated that due to his unsuccessful hunt for a job, he was forced to set his degree aside and look for other means of survival unrelated to his profession.

After close to six years of being unemployed, Katengo in 2017 decided to venture into the auto spare parts and car business.

” Students should pursue enterprising ideas that they are passionate about and implement them so that once they graduate, they can establish sustainable business ventures for themselves that will in turn create employment opportunities for others,” he added.

Katengo is not an exception as many graduates have continued to grapple with unemployment. Raphael Chiti, a Bachelor’s Degree holder in Mass Communication from UNZA, is another graduate who has turned to entrepreneurship after failing to find a formal job.

But luckily for Chiti, he started his own media business in 2013 just after completing secondary school education.

“I started buying equipment in 2013 after completing grade 12. I first started as a barber then I shifted to music production in 2016. In 2018, I started photography and in 2020, I started making videos. Now am doing all the above except for barbing,” Chiti said.

However, despite being business-minded and starting his business at a young age, Chiti still wanted to be employed after his graduation in 2021.

“Yes, I was looking forward to employment. With the thought of coming from the best university in Zambia, I thought employment was a piece of cake, but I was wrong,” he said.

Chiti said he came to realize that the worth of a degree is in the holder and not the institution from which it was acquired.

“It is not an option, people need to embrace self-employment as they search for jobs, do something,” Chiti added.

In a bid to reduce unemployment, government has employed 30,494 teachers and 11,200 health workers.

Nevertheless, though commendable, employing over 41,000 people in the public service is a drop in the ocean if one was to consider the number of graduates that applied for the same jobs. This leads one to wonder whether the four years or more of financial and psychological investment are worth it when faced with the bitter reality that the elusive paper might not land one a job.

The University of Zambia (UNZA) through the School of Veterinary Medicine has mobilised from its partners and stakeholders about USD 241, 800 worth of...