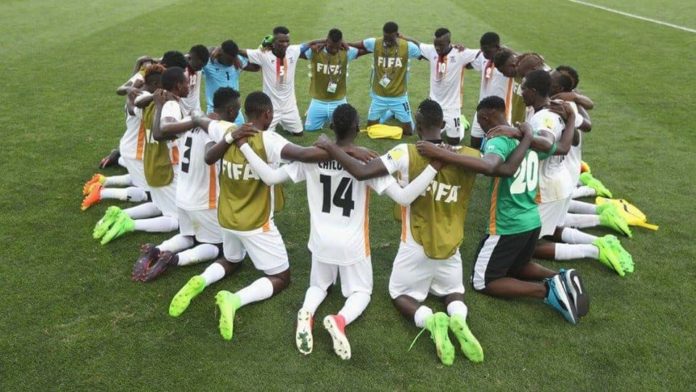 Soccer fans in Lusaka have expressed confidence in the Under 20 National Soccer team’s chances of winning the FIFA under 20 World Cup.

Various soccer fans have said they are impressed with the performance of the team so far and that the team has what it takes to go all the way to the final and claim the trophy for the first time in the country’s history.

Kalaluka Wamundila, a soccer fan from Mtendere Market in Lusaka stated that he was greatly impressed with the progress the team had made so far.

‘The boys have really made us proud so far. They have really given me great pride to be a Zambian at the moment,’ he said.

Another Soccer fan, Chewe Kakumbi, from Kalingalinga added that he was  closely following the progress of the team the time ever since they claimed the COSAFA tournament and the under 20 AFCON trophy and that he was  convinced that the Junior Chipolopolo will bring glory to the country.

‘You can just see from the way they played at COSAFA and AFCON that the boys have the drive and zeal to do great things and achieve so much glory. I think credit should also be given to the technical bench for the great work they are doing in drilling the boys,’ said Chewe said.

However, some fans have expressed skepticism at the performance of the junior Chipolopolo at the ongoing Under 20 World Cup being hosted by Korea Republic claiming that there is need for the team to be more focused and hard working.

Ngenda Tumelo of Garden Compound in Lusaka claims that the team’s performance in the opening game at the tournament was not adequate.

‘In as much as the team managed to emerge victorious, the win wasn’t convincing. The coach should work on how to coordinate the midfield as well as strengthen the defense,’ he said.

Zambia  kick started their campaign at the World cup with an emphatic 2-0 victory over two time champions Portugal.

Zambia, who were crowned African champions on home soil earlier this year, frustrated Portugal with two impressive goals.A win in Zambia’s next game against Iran on Wednesday will guarantee qualification to the knock out stages.

The Lusaka Water Supply and Sanitation Company (LWSC) has called on Landlords and tenants to discontinue the use of old pit latrines. This follows the fatal...