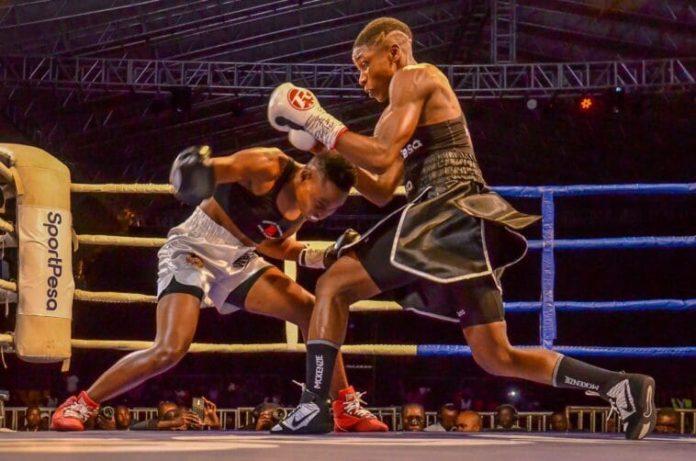 She has since  refuted allegations that her victory was stolen when she fought Kenya’s Fatuma Zarika in a World Boxing Council (WBC) bantamweight title fight on Saturday, last week in Kenya.

Speaking during a press briefing at National Sports Development Centre (NASDEC) in Lusaka yesterday, Phiri said she respects the decision made by the judges .

“I am not disappointed with my performance in Kenya, I know I did my best and i cannot say I was robbed because the judges have their own reasons for declaring Fatuma as the winner, this is sports whether lose or win I will return to the ring shortly,” said Phiri.

Many pundits, including Kenyans, believes that Phiri, who is a former World Boxing Council (WBC) batamweight champion, was robbed of her victory when she fought Kenyan Fatuma Zarika on Saturday at the Kenyatta International Convention Centre (KICC) on Saturday.

During the fight, which lasted 10 rounds, the Kenyan boxer sustained a deep cut on the left cheek but fans were surprised that Phiri who came out intact with no injuries was declared loser by the three panel of judges.

However, others believe that the reason the Zambian pugilist lost was mainly because she on several occasions missed hitting Zarika on the right spot.

Meanwhile, Chief Kanyesha of Luano district has given Phiri 250 hectares of land and two cows for staging a splendid fight against Zarika.

The traditional leader said he was overwhelmed with the way Phiri fought and he still thinks she was the rightful winner.

The chief has since encouraged the Zambia Police officer to carry on with the same spirit and assured her that she will one day return the Women’s super-bantamweight championship.

The Zambia Boxing Federation (ZBF) has postponed the interprovincial tournament that was due to take place this weekend. Speaking during an interview with UNZA radio,...