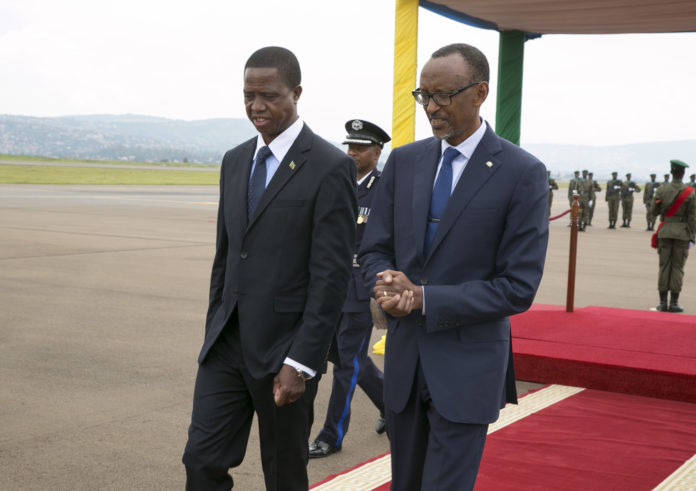 NLF  is a military wing of a Rwanda opposition political party, the Rwandan  Movement for Democratic Change led by Rwandan dissident Paul  Rusesabagina, known for protecting people during 1994’s Rwandan genocide as a manager of Hotel des Mille Collines.

Rwanda’s terror suspect Callixte Nsabimana a.k.a Major Sankara Nsabimana appeared in court on Monday where he pleaded guilty of all charges but said that he was misled by some individuals including Kayumba Nyamwasa, one renegade senior officer of the Rwandan army currently seeking asylum in South  Africa.

Speaking Monday before the International and Cross-Border  Crimes, Nsabimana accused Zambian President Edgar Lungu of allowing them space to operate in his country to overthrow the Rwandan government.

The trial was conducted digitally due to COVID-19  measures where all the parties made submissions through a live video link. There were glitches from the start of the trial which were resolved and the hearing proceeded.

The defendant is facing several charges including the formation of an irregular armed group,  complicity in committing terrorist acts, conspiracy and incitement to commit terrorist acts, taking persons hostage, murder, and looting.

Nsabimana was the spokesperson of a rebel outfit that calls itself National  Liberation Front (FLN, French acronym), which has been accused of attacking villages in Southern part of the country, killing people,  looting and destroying property.

The former rebel leader who promoted himself to the rank of Major, according to the prosecution began his journey when he was expelled from a government university in  Rwanda, then reappeared in South Africa as a member of the group led by former RDF chief Gen Kayumba Nyamwasa in 2012.

He also spent time in Indian Ocean island of Comoros.

For years, since he began dissident activities in South Africa with the  Rwandan National Congress (RNC) of Gen Kayumba Nyamwasa, Sankara always appears in dark sunglasses.

On capture before his extradition to  Rwanda, Sankara was found with Lesotho passport under the names Kabera  Joseph, born from Masisi, DR Congo. It was acquired in 2013. Sankara paid 5,000 South African Rands ($ 300 USD). The prosecution says it is a  fake passport.

Soccer analysts have welcomed the signing of a two-year Memorandum of Understanding (MOU) between Xtra-Miles Academy of Miles Sampa and Christopher Katongo Academy in...