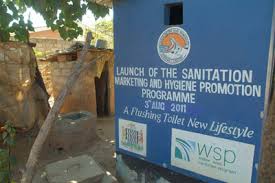 The project which was launched last year is being spearheaded by the Lusaka water and Sewerage Company (LWSC) sanitation programme is set to begin the phase two installation of modern flushable toilets in Kalingalinga ward 21 this week.

Area ward councillor, Emson Mbewe said he was pleased with the phase one installations in the area despite the problems encountered with the water pipes that burst.

“Because of too much water pressure, the old water pipes have been bursting but with the first phase finished, more water will be used by the installed toilets and we are therefore expecting the problem to cease,” he said.

The councillor was reacting to the concerns raised by the residents after a recent water pipe burst adding that whenever a pipe burst, the LWSC replace the old 1980’s pipes with new ones.

He also noted that phase one of the project took longer to complete because members of the community were funding themselves to get various equipment for the installation process.

“The second phase will obviously take a short period because the residents will be given loans to facilitate the programme unlike the first phase where they had to fund themselves to acquire the equipment for the installation,” he said.

Councillor Mbewe explained that a plan had been put in place were those acquiring the loans will have to repay the loans as they pay for water.

He encouraged the residents to take advantage of the loan scheme provided by the LWSC and make sure that their toilets were upgraded during this phase.

The councillor also claimed that Kalingalinga ward 21 is one of the cleanest areas in the city as regards to waste management.

And councillor Mbewe took time to warn residents in his ward to desist from indiscriminate waste disposal urging them to comply with the authorities in order to maintain the high standards of sanitation in the area.

Meanwhile, Lusaka’s Justine Kabwe ward 21 councillor has called on the government to deploy more medical staff to the area.

Area ward councillor Francis Mwenya said in an interview recently that the clinic in his area lacked adequate medical personnel to attend to the community.

He noted that the available staff is often times called incompetent by members of the community since they get fatigued as they do not have people to change shifts with.

“Our population is vast and you find that only one doctor or nurse is attending to a lot of people on a daily basis without any rest because the clinic does not have enough staff to accommodate the growing population,” said Councillor Mwenya.

The Jesuit Centre for Theological Reflection (JCTR) says the 2018 National budget falls short in reducing poverty, inequality and job creation among Zambians. In a...