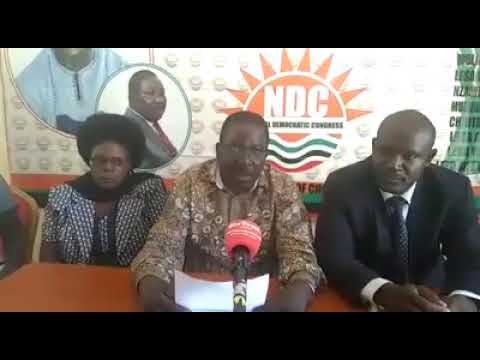 The opposition National Democratic Congress (NDC) has resolved to support the United Party for National Development (UPND) in the Lukasha and Mwansabombwe parliamentary by-elections slated for next month.

Mr. Akafumba said the decision to support a UPND candidate has been made with the sole purpose of harnessing and promoting the principles of the opposition alliance.

He said the NDC will go flat out and campaign for the UPND in both Mwansabombwe and Lukasha parliamentary constituencies.

He has since urged all NDC members in Mwansabombwe and Lukasha constituencies to flock in large numbers and support the UPND as it files its nomination bid.

Mr. Akafumba has meanwhile called upon all well meaning opposition parties to join the alliance.

He observed that the Patriotic Front (PF) can only be removed from political office by a united opposition front.

And Mr. Akafumba noted that there is need to change the perception that the UPND can not field candidates in territories viewed and believed to be PF strongholds.

He said the UPND is a national party contrary to views being peddled by some desperate groupings that the largest opposition party was regional.

And the NDC vice president is optimistic that the opposition alliance will remain firm and resolved as it strives to form the next government.

The Lukasha and Mwansabombwe constituencies fell vacant after their Members of Parliament Mwenya Munkonge and Rodgers Mwewa died.

TWELVE times Zambian Super League Champions Nkana Football Club have unveiled their 32 man squad for the 2019/2020 season which Kicks off on August...