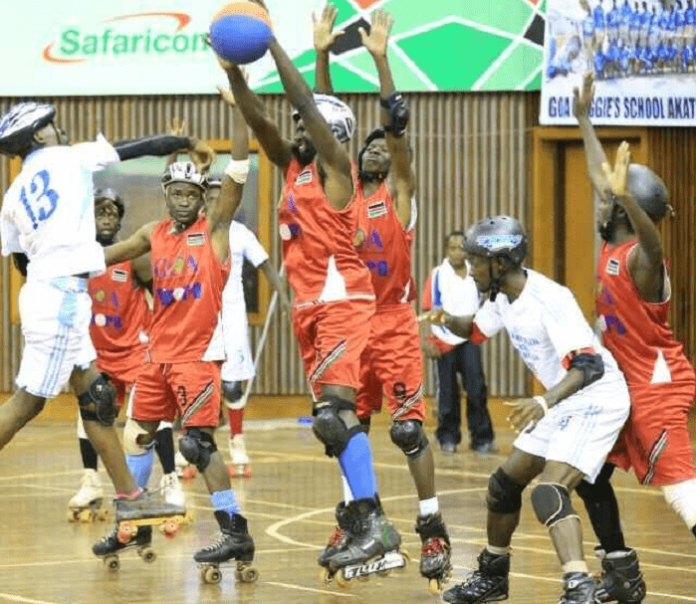 When ball games are mentioned, only popular sporting disciplines like football, basketball, netball, volley ball and handball come to mind while Rollball is hardly mentioned.

Rollball is a sport similar to basketball or handball except it is played on quad or inline skates. It was invented by an Indian physical education teacher, Raju Dabhade of Pune City at MES Bal Shiksan Mandir, English school in 2005.

The play consists of two teams with six players each, five field players and a goal tender on a court similar to a basketball setup except using skates, with the aim of scoring.

The first Roll Ball World Cup was held in 2011 in India of which Denmark was first place in the tournament with host India emerging runner-up. At the time, Africa was  represented by Tanzania, Kenya and Uganda.

The second global tournament was held two years later (2013) in Nairobi, Kenya. The 2013 title was scooped by India  after defeating  Iran in the finals.

In the 2015 edition of the Rollball world cup, Zambia got  its first invitation to participate. Sadly the  team was eliminated  at group stage. Zambia’s elimination in the world cup can be attributed to  lack of proper experience and equipment in the country.

In 2017, Zambia again took part in the world cup in India, beating Bhutan in the pre-quarter final and later losing to host India in the quarter final, the latter defending the global cup.

It is interesting to note that the Zambia National Rollball provisional squad that took part in the past two world cups comprised of only students of the University of Zambia (UNZA).

Maambo Musute, who is currently national team trainer and fourth year student at the institution pursuing a Bachelors’ degree in Public Administration with Development Studies is part of the team.

“I have been skating since childhood as an extra-curricular activity, but in 2014 I heard that there was a new sport that involved skating and that it involved a lot of ball work like basketball and scoring like in handball, he narrated.

“I have always loved basketball and so when I heard that roll-ball  was  a combination of basketball and handball tactics while skating, I decided to take the sport right away as it would allow me to play my favorite sports in one game,” Maambo said.

He boasts of being his own inspiration and noted that it is difficult, if not impossible to single out an individual at world level who can act as his role model.

Being at the helm of such an interesting and growing sport requires one  to always keep fitness levels and skating tactics at par. Above all as a trainer, one should  be an example to the rest of the team.

Maambo added that just like any other growing sport, there are a number of challenges that the team is faced with among them the risky nature of the sport as being the major constraint to the rapid growth of the sport.

“Most of the people interested in rollball are students who wouldn’t want to get injured because this can subsequently affect their academic activities… The other constraint is that we can’t register the sport with the National Sports Council (NAC) because we don’t have a proper organisational structure which is a requirement from the sports mother body,” Maambo explained.

At the age of 25, Maambo has an important role to play in fostering the development of the sport. He hopes many stakeholders could come on board before next year’s world cup and help to form a national executive so that roll-ball can spread to other parts of the country other than UNZA and newly formed clubs in Kanyama.

It all started in the twilight hours of Tuesday, the 9th of August, when innocuous UNZA happenings virtually went from bad to worse for...