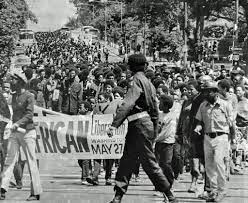 The message of African unity and her self-realisation has continued to echo across all corners of the African continent through profound writings, speeches and songs. Despite these passionate calls, there is little to show that Africa is rising from its slumber.

African Freedom Day, which is meant to galvanise Africans to rise to the occasion and take charge of their destinies, is now a day for mere rhetoric and soundbites by leaders who do not mean a word of what they say in their flattering speeches.

The lack of development and solidarity among African countries has left many supporters of pan-Africanism disappointed as they have faulted the greed and bad leadership of African leaders for the continent’s current predicament.

” Some newly appointed government leaders are not involved in exploring how best they can serve their fellow citizens, but are prioritising and actively looking out for money making opportunities. Sadly, this is done without any self restraint or even the slightest shame,” Mwaanga said.

”In some African countries, including Zambia, corruption has been so entrenched and normalised that it is seen as being abnormal to hold a senior position in government and yet not be corrupt.”

Mwaanga, a former Minister of Foreign Affairs under the UNIP government, said that development has taken a back sit in Africa as a lot of time and resources are wasted on internal conflicts and military coups.

“The department for Conflict Prevention Management and Resolution, based in the African Union (AU) headquarters in Addis Ababa, Ethiopia, appears to wait until people start killing each other before intervening. The preventive part of this mechanism is supposed to be used much more often, to pre-empt looming conflicts,” he added.

A study by BBC identified over 200 coup attempts in Africa since the 1950s.About half of these have been successful. In this case, a successful coup implies one that lasts more than seven days.

Dr Sam Phiri, a lecturer in the Department of Media and Communication Studies at the University of Zambia (UNZA), said that despite much of Africa achieving independence more than 50 years ago, the continent has left its development agenda in the hands of western countries.

“Africa is lost in the maze of the western world, and what message do you give to a lost son because Africa is lost. All it can do is to realise its situation and go back home,” Phiri noted.

He further said that youths in Africa have failed to appreciate and understand the continent’s culture as they has been no transmission of knowledge to them through the teaching of the continent’s real history in schools.

“We only understand ourselves in relation to the arrival of white people. Unless current attempts to liberate African curricula are a success, Africa is still far from setting a lead in thinking.

”However, if such small steps as renaming places like Livingstone can be taken, then Africa would be drawing closer to resetting the minds of its people,” he said.

Phiri, who is a former permanent secretary in the Ministry of Information and Broadcasting, also blamed the media for not playing its intended role in uniting Africa and promoting integrity on the African continent.

” The media should liberate themselves from mental colonialism and be objective in the way they project Africa,” he added.

Meanwhile, Head of UNZA’s History and Archeology Department, Dr Alfred Tembo said that Africa is not short of great thinkers and philosophers that can propel the continent to greater heights.

”Africa has had great thinkers who have influenced philosophical thinking on the continent of Africa and beyond. Many of our first generation leaders such as Dr Kenneth Kaunda were good thinkers if you look at his philosophy of humanism,” Tembo said.

He added that economic emancipation of Africa is possible, but this should start with improved trade among African countries.

”More forward-looking investment programmes such as the recent one between Zambia and Congo DR in electric batteries should be brought forth,” the historian said.

In April, Zambia and the Democratic Republic of Congo (DRC) signed cooperation agreements for the two countries to start manufacturing electric car batteries.

SOME non-Government Organization have called on government to come up with land policies that will promote access, control and ownership of land by women....