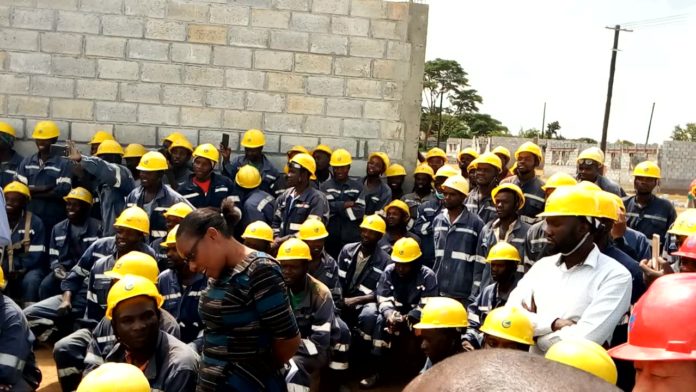 Employees of AVIC Construction Ltd. at State Lodge Police Camp site have expressed dismay over the alleged inappropriate working conditions that the Chinese firm is subjecting them to. The workers said they are compelled to work for abnormal hours without being granted days to rest on weekends for fears of losing their jobs.

One of the workers, who refused to be is identified for fear of victimization, complained about the lack of accommodation at the site despite early reporting time.

“Most of us come from far places such as Bauleni and even as far as Chawama because the areas around this place are too expensive for us to afford, but the company wants us to report at 06:30 when they don’t allow to stay at the site,” he said.

He also expressed disappointment on the company’s inability to provide the workers with safety foot wear, despite risks associated with the nature of their job. Another worker who also refused to be identified for reasons already alluded to, bemoaned the continues resistance by the company to allow them to sign contract agreements.

“When we ask the madam (Human Resource Manager) about the contract, she tells us that it is illegal to award us because the company doesn’t allow that,” the employee lamented.

He also complained about unpaid wages by a named sub-contractor called MOZEC Ltd. hired by AVIC in the last month. He further called on government to liaise with the management of the Chinese company on how they can ensure the employee’s bills are settled.

Meanwhile, Lusaka Province Minister Bowman Lusambo advised the employees to shift their attention from only focusing on the monetary benefit of their work, but the skills development from the occupation.

“These foreign companies are only here to stay temporarily, so you have to take this opportunity to extract their knowledge, so that we can do away with them in the next five years. You Zambians have the potential to run your own companies and this is your university,” Hon. Lusambo said.

Hon. Lusambo also urged the company’s Operations Manager to restructure the employee’s working schedules to accord them days to go to church.

“You don’t need to trample upon the days of worship for the employees, hence for those that go to church on Saturday, let them work on Sunday and vice-versa,” he added.

Efforts to get a comment from the company’s Human Resource Manager proved futile as she was unavailable by press time.

Writing is an art which authors use to plant seeds of change in the fertile minds of the readership. One such author is Paul...