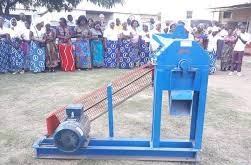 Saint Francis Xavier Parish Women’s Council in Kalingalinga have expressed gratitude towards Munali constituency Member of Parliament (MP), Professor Nkandu Luo for the donation of a hammer mill made three weeks ago.

The Catholic Women’s Council Chairperson, Tomaida Phiri said the women were privileged to have been given the hammer mill and a sum of K10,000 donated by the Minister.

“It is an honor to have been given the hammer mill for it will help empower women in the catholic Women’s Council in many aspects of our business,” Mrs. Phiri said.

She added that the council not only looks after orphans in the community but also rears chickens that helps them with finances and empowers women in the Catholic council to be business minded.

“We look after orphans in the community and help to identify the vulnerable children. We also keep chickens as the women’s council which we sell and use the money to manage daily activities and by doing this we help women to become business minded,” Mrs. Phiri stated.

Meanwhile, Kalingalinga Ward 31 Councilor, Kasongo Chomba told the Lusaka Star that he was grateful for what the Minister did and has called upon the Catholic Women’s Council to take care of the hammer mill and to be free at any time to call upon his office if help may be needed.

“I want to appeal to the women’s council to take care of the hammer mill and if they need help in how to use it or any advice, my office is open any time during working hours,” Mr. Chomba said.

He urged other women in other churches to mobilize themselves in groups and see how they can support one another and venture in business.

And Kalingalinga resident, Mary Mutale said that they were thankful for the donation of a hammer mill and the sum of K10,000 which was pledged by the Minister, for it will empower them and create a huge difference in the community.

She, however, added that the donation and the money was given only to the Catholic Women Council Committee and not generalized to every woman in Kalingalinga which should have been done.

She urged the Catholic Women Council members to cooperate and use the hammer mill and money appropriately, as expected and no woman catholic or not, be left behind.

This was after the Minister donated a hammer mill she promised on Women’s day and pledged K10,000 to the Catholic Women Council in Kalingalinga ward 31.

The international friendly match between the Chipolopolo boys and Bafana Bafana of South Africa that was scheduled for Saturday, September 7, 2019, has been...