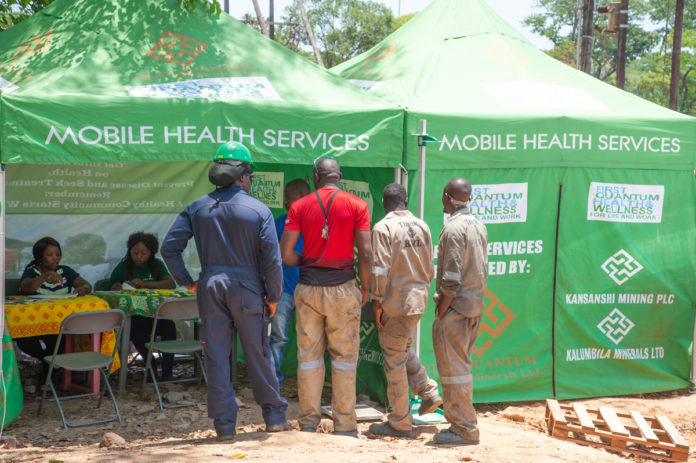 First Quantum Minerals (FQM) has reassured communities in Solwezi that it will continue with its extensive support of the primary healthcare system in the district contrary to assertions that the support would be interrupted.

First Quantum has a long history of supporting the communities surrounding both Kansanshi and Sentinel mines. We are proud of the work we have done in partnership with the communities and the Ministry of health to date and this work will most certainly continue,

On Tuesday last week a social media report alleged that over 50,000 community members in Solwezi District in North-Western Province were at risk of missing out on adequate provision of health services after FQM terminated a contract with an organization contracted to provide some primary healthcare services in the area on behalf of the mining firm.

According to the report, a company called CHAMP had a running contract with FQM to provide support to 15 rural health centers located in Solwezi, Kalumbila and Mushindamo districts.

But General Chinkulu described the allegations as a frivolous attempt by disgruntled individuals to discredit the company’s role in providing development in the areas it operates in and added that such claims could have damaging consequences on responsible corporate citizens.

And FQM health programmes and projects adviser Gertrude Musunka said the firm remained focused on its support and engagement of local communities.

“We are currently working shoulder  to shoulder with the Ministry of Health through the respective district health offices in both solwezi and Kalumbila on Covid-19, malaria, HIV and other public health issues,” she said.

The company has over the years continued to place health programmes at the fore of its community initiatives and is currently undertaking programmes across its six pillars of focus with an annual health budget of about 15 million dollars.

Last year the company sprayed 34,983 structures under its indoor residual spray programme, screened 92,329 community members for malaria and 18,460 for HIV/AIDS and syphilis.

An autism awareness foundation has stressed the need for society to identify autism early in order to ensure that appropriate action and treatment is...