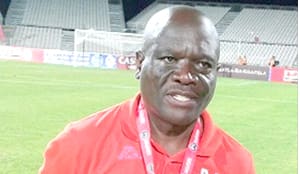 INTERIM coach Beston Chambeshi says he is not fighting for any coaching position at the senior national team.

Chambeshi, a former assistant coach to Wedson Nyirenda, who resigned to join South Africa side Baroka FC, told COSAFA.COM that time will come when people will request his services.

Beston Chambeshi, led Zambia to the finals of the 2018 COSAFA Castle Cup, were they lost 4-2 to rivals Zimbabwe.

“I am not fighting for a position at the national team but the time will come when people will say ‘yes he is ready to coach,” he said.

“I am a legend in Zambian football and I always feel happy when I see young players coming up,” Chambeshi said.

The Nkana coach added: “All I want is to make sure that we produce good players in Zambia and have a strong national team, that’s my aim.”

Chambeshi, led the Zambia under 20 side to their first ever Africa Cup trophy at home soil in 2017, before guiding them to a quarter final appearance at the 2017 Korea World Cup showpiece.

Previous article « COMMITTEE TO REGULATE FOREIGN INVESTORS TO BE ESTABLISHED