Lusaka StarService with Excellence
HomeNewsM’MEMBE TAKES SWIPE AT CAPITALISM, LINKS IT TO JOBLESSNESS 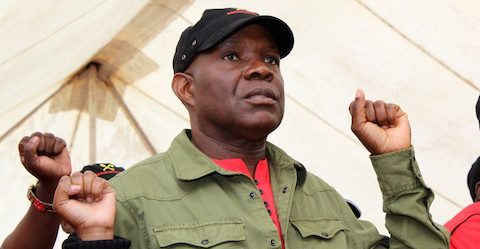 Socialist Party President Fred M’membe says that digital capitalism today is not creating jobs for Zambian citizens as it aims to maximize profits while reducing the cost of labour.

Speaking during a press briefing held at the party headquarters in Lusaka on December 5, 2019, Fred M’membe said that young people had no where to work after completing their education as jobs were being taken over by technology.

M’membe went on to talk about the Public Order Act that he said was being grossly abused by those that were in power in order to control political activity.

He said that those in power did not want opposition political rallies, as there was fear of being undermined by them mobilizing.

They want to go in a boxing ring with their opponents hands tied behind them so that it is only them who can throw punches.

When questioned about the postponement of Bill 10 that has recently sparked debate, M’membe said that whether the matter was dealt with now or in the future, the Bill was troubled.

It is not about how much political power you have to get your wish or if you have the majority in parliament. It is about building consensus so that the constitution that comes out of there has a general ownership by all stakeholders.

He further stated that it was not the appropriate approach to take when it came to amending the constitution as many important matters were at stake.

Government says it is addressing the deficit  in national fish production through the Zambia Aquaculture Enterprise Development Projects (ZAEDP) which aim at contributing to  economic...