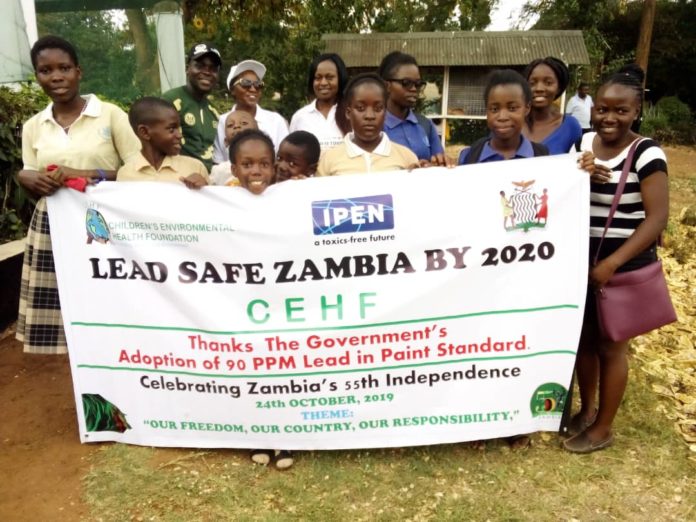 “Only the impossible is worth the effort,” a famous quote by Jeanette Winterson is a typical description of one’s tireless efforts in pursuing an innate zeal for success.

It might even take months, years and sometimes decades to actually hit the pinnacle of a pursuit but determination is a canning charm to such pursuits.

This is a delightful expression that defines the caliber of Michael Musenga, Chairperson of the Children’s Environmental Health Foundation (CEHF), an organization that has been spearheading the standardized use of lead in paint in order to protect and promote children’s health in the country.

Mr Musenga, enlightened the Lusaka Star on the importunate journey of the advocacy stating that promoting children’s health was the drive of the organization.

He was recently appointed by the Zambia Institute of Environmental Health (ZIEH) as National Trustee, in recognizing his notable gestures on his tireless works for the organization in advocating for a healthy and safe environment for children.

Mr Musenga was speaking during the International Lead Poisoning Prevention Week of Action 2019 that took place on the 20th of October to the 26th, 2019.

“The Lead Poisoning Prevention Week has a focus on eliminating lead in paint with a particular concern on its use on a global scale and the role of lead in the development of intellectual disabilities in children,” he explained.

And Mr Musenga was also hosted on ZNBC’S Chintobe Ntobe programme where he explained to the audience on how lead in paint could affect pregnant women especially the unborn child.

He explained during the programme that lead was also the cause of mental dementia in children whenever they were exposed to it.

The CEHF Chairperson and National Lead Country Advisor however clarified that the advocacy for the 90 Parts Per Million in paint standards was not going to pose any threats to the various paint business owners.

He encouraged business owners to take time and review the standard so as to understand what is needed for them to operate their businesses effectively.

Meanwhile, students at Highlands Open-Learning School in Livingstone expressed delight on hosting CEHF and learning about the effects of lead.

Children as young as the age of seven appealed to parents to work together with authorities in ligating lead in paint for their protection.

They also expressed gratitude to both the school administration and CEHF on recognizing the importance of children’s health.

Speaking on their behalf, Highlands Open-Learning School Deputy Head Teacher Harry Zimba told the pupils that lead was preventable and could easily be done at the source as it had been done with gasoline.

Mr Zimba emphasized on the effects of lead in homes, schools and toys and the need to control it from the source by having laws to guide the production and its use.

Zambia’s participation in this year’s 7th ILLPPWA has been to develop lead paint laws and according to the World Health Organization(WHO) only 73 countries worldwide have put in place legally binding control laws that ban lead in paint and in Africa four (4) countries have now laws that banned lead in paint and these are Cameroon, Ethiopia, Kenya and Tanzania.

Veteran sports Journalist Mircha Chilemena has advised the current crop of soccer commentators to build their own standard of commentary if they are to...