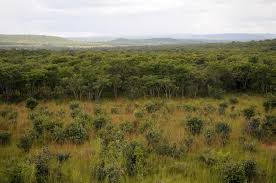 Ministry of Lands, Natural Resources and Environmental Protection is conducting an inventory and evaluation of the extent of deforestation in Chibwe National Forest in Kapiri Mposhi district with the view of restocking the woodland with indigenous tree varieties.

Kapiri Mposhi District Forestry Officer, Darius Maluzi said Chibwe National Forest has lost a lot of tree stocks and species because of indiscriminate cutting down of trees for timber and charcoal burning and illegal settlements in the national forest reserve.

Mr. Maluzi said the Ministry of Lands, Natural Resources and Environmental Protection has since engaged the Zambia National Forestry College to conduct an inventory and evaluation of the extent of deforestation in the area in readiness for its restocking under the program dubbed Enrichment Planting Program.
“we are about to start re-introducing chibwe national forest with trees which have been depleted through various destructive activities so scientists from the National Forestry College are on the ground to establish the number of trees that we need to re-plant,” Mr. Maluzi said.

And Zambia Forestry National College Head of Biology Department, Benious Ikachana said the undertaking to restock the forest will involve harnessing seedlings and stamp sprouts from the cut down trees in the forest.
Mr. Ikachana who is the team leader of a group of scientists and students carrying out the inventory and evaluation exercise stressed that the restocking exercise will not introduce foreign tree species to forest but will utilize sprouts and seedlings of indigenous tree varieties in the forest.

He said Chibwe National Forest had potential to restock itself but pointed out that the rate of deforestation in the forest reserve was not encouraging for natural tree re-growth.

“we are not introducing any new plants to the forest in the bid to restock it but we will nurture and obtain seedlings from the shrubs which are already existing in the forest as this will be sustainable in that these tree species are indigenous to this area,” Mr. Ikachana said