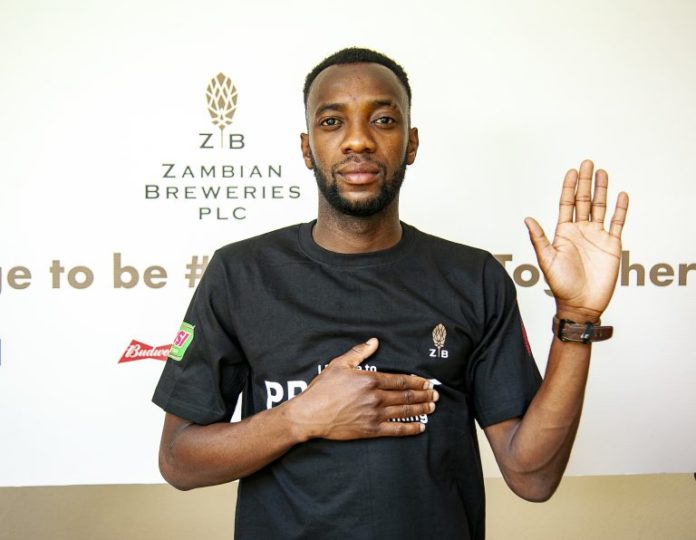 Zambian Breweries has teamed up with the Football Association of Zambia (FAZ) to encourage fans to make smart drinking choices.

The campaign, dubbed #ResponsibleTogether, kicked-off in September with the company signing a memorandum of understanding with Lusaka City Council to tackle binge drinking, underage drinking, illicit alcohol, drinking and driving, and gender-based violence.

“The campaign is about responsible drinking. And we want every experience with beer to be a positive one and we have been committed for years to be part of the solution, said Zambian Breweries Corporate Affairs Manager Ezekiel Sekele

“We have continued to remind our consumers to drink responsibly; and that if they decide to drink alcohol: pace your beers, hydrate or have food while drinking. And most importantly, don’t drink alcohol excessively.”

He said that the country’s largest brewer will use the partnership with FAZ to sensitise beer-lovers on making smart drinking choices.

“Zambian Breweries is concerned with the ultimate welfare of the consumers of our products, and we believe we can help reduce harmful drinking. As a company, our dream is to create “a better world” that encompasses a healthier world,” Mr Sekele continued.

FAZ Deputy General Secretary Joseph Chimpampwe said the campaign could not have come at a better time, because it was in line with the players’ careers, and it will help them to create the right mindset and reinforce drinking responsibly.

“We are not saying they should stop, but they should drink responsibly because there is a better tomorrow for them. We don’t want them to end up destitute because of a drink.

“From the FAZ point of view, we look at partnerships above sponsorship, because we believe we also have the value that corporates can leverage on. So, we go into strategic partnerships so that at the end of the day it’s done on a mutually beneficial level,” said Mr Chimpampwe.

“Drink responsibly, don’t drink and drive, your life is precious,” he added.

Zambian Breweries takes responsibility for responsible alcohol consumption seriously, and the company has urged the government to respond to the threat of illicit alcohol such as junta and tujilijili decisively and quickly.

Cheap illicit alcohol, under-age drinking, drunk driving, and other forms of alcohol abuse have continued to be of enormous concern to the company and it remains committed to following the law, paying taxes, and promoting responsible drinking. Drinking of alcohol must be undertaken responsibly, said Mr. Sekele.

The Ministry of Health through the Zambia National Public Health Institute (ZNPHI) has set new COVID-19 testing criteria as the outbreak in Zambia has...