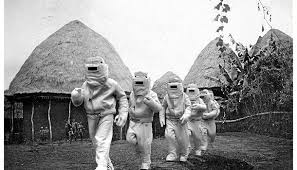 The 60s was a pretty interesting decade for Zambia. Of course the most notable milestone that Zambians remember is the country regaining its independence from colonial rule; who wouldn’t remember such a big historical event?

However, a forgotten history one may want to add to their timeline about the 60s is the country’s involvement with the ‘Space Race’ as a minor player. Yes, the big moon landing mission that involved the United States and the Soviet Union.

How Zambia got linked to the space drama was all the doing of one man, Edward Makuka Nkoloso, a former science teacher and director of Zambia’s National Academy of Science with ambitious plans to beat the United States and the Soviet Union to the moon. Oh, and go to Mars too!

As time has passed and the story is only known to a few, some have called it a fallacy while others have referred to it as a publicity stunt. But one thing is for sure, it is as fascinating as it is ambiguous.

Little is known about what really transpired at the conception of this space mission dubbed ‘The Zambia Space Program’. What the Lusaka Star knows is credited to research and writer Namwali Serpell, who told Nkoloso’s story in a piece for the New Yolker.

The space enthusiast was inspired by his first airplane flight.

When the pilot refused to stop the plane so that he could get out and walk on the clouds, Nkoloso made up his mind to enter the space race,

The team included a 16-year-old girl named Matha Mwamba who he intended to blast off to the moon alongside two cats, and a missionary who would take on Mars. The missionary was given a directive to not force Christianity on life that was found there.

To prepare his Afronauts for the space mission, Nkoloso spun them around a tree in an oil drum and taught them to walk on their hands; “the only way humans can walk on the moon,” he claimed.

It is reported that he also made them swing from a long rope.

When they reach the highest point, I cut the rope. This produces the feeling of freefall,

he told a reporter.

Of course funding is needed even for such a fervent mission. Nkoloso already planned that out too.

Newspapers reported that he requested for large sums of money ranging from 20 million to 2 billion dollars from the United Nations Educational, Scientific and Cultural Organization (UNESCO), the United Arabs Emirates (UAE), as well as the United States, his would-be space race competitor, among others.

One reporter allegedly saw piles of letters from foreign well-wishers who only provided him with advice and no money. What came as help in monetary form was a 10-rupee note sent by a space-minded Indian schoolboy.

Serpell reported that Nkoloso had considered launching his space shuttle with a catapult system that turned out to be “much too primitive”.

Sadly, the ambitious mission never saw the light of day.

My spacemen thought they were film stars. They demanded payment,

he explained to a newspaper.

Two of my best men went on a drinking spree a month ago and haven’t been seen since.

Matha Mwamba got pregnant and dropped out of the mission too.

Nkoloso blamed the lack of funding on people he insisted were “scared of Zambia’s space knowledge.”

The Zambian government also distanced itself from the endeavor.

Though Nkoloso could not turn his space dream into reality, he is still remembered as an ambitious and impactful man.

To commemorate the events as well as Nkoloso’s efforts, a photograph book ‘Afronauts’ was published by Cristina De Middel in 2012. A short documentary film titled Afronauts, directed by Frances Bodomo, premiered at the Sundance Film Festival in 2014.

Nkoloso was also depicted in Nkoloso the Afronaut, a 2014 film that received a nomination at the Uganda film Festival. He also appears as a character in Serpell’s 2019 novel, The Old Drift.

The jaw-dropping story of Edward Makuka Nkoloso is so amazing that it should be what children in the coming generations will be singing about as they play. It is hoped that this space endeavor will not be the only one Zambia will attempt.