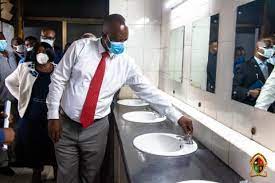 Lusaka Province has in the last few weeks recorded a cumulative total of seven cholera cases in Mtendere East, Chilanga Middle East, Kanyama, Kabangwe, Matero and Kalingalinga, which is just a stone throw away from the University of Zambia (UNZA) Great East Road Campus. This is not breaking news to many people as the outbreak of cholera in Lusaka is, unfortunately, perennial.

Notwithstanding this unfortunate fact, it is unprintable shame that the outbreak of cholera in Lusaka every year is now fixed on our calendars. No rationalization or explanation can be availed for such a failure to avoid a preventable disease.

The causes of Cholera, which is an acute illness of the small intestines caused by a bacterium known as Vibrio cholera, are mainly environmental. It could emerge from the poor sanitation that facilitates the contamination of food. Therefore, a lack of sanitation and clean drinking water are fertile ground for a cholera outbreak.

However, as Lusaka continues to reel from cholera, UNZA, on the other hand, is experiencing deterioration in its sanitation such that students have had to protest. Last year, in what can best be described as blatant disrespect to womanhood, female students were forced to protest at the lack of timely disposal of sanitary bins in their hostels.

The lack of urgency by management to pay cleaning companies money in order for the companies to dispose of sanitary bins not only denied students the chance to manage their periods with dignity, but further exacerbated the stigma and societal beliefs that a period is unclean.

UNZA students do not only have to contend with the late disposal of sanitary towels, they are also faced with another grave issue, which are the filthy toilets and showers. The University has very few tolerable toilets that one can trust their bare behinds for their excretion.

Lusaka being an epicentre of cholera in this country, one would expect the people in-charge of the University to take the effort to keep the toilets clean, knowing fully well the risks of dirty toilets. However, that is not the case as care and maintenance of toilets has been given a wide berth.

The toilets in the hostels are fetid, stinking with urine from here to Mutwe wankoko in Luapula Province. This is on top of having wet floors and missing cistern lids. In rare moments when one stumbles upon a flushable toilet, its flushing system involves pulling some worn out, old and rusty wire.

One of the few trustworthy toilets in the school area are found at the teaching and learning complex, albeit usually closed to the public. This has forced students to either answer the call of nature in the few toilets found in the main library or rush back to the hostels.

Sanitation at UNZA is a sticky mess, therefore, it is encouraging to hear that management has set up an ad hoc committee to spearhead the maintenance and sanitation works to be undertaken at both Great East Road and Ridgeway Campuses.

Resolving the sanitation crisis at UNZA should be a priority. Proper and adequate toilets and sanitation facilities are keys to preventing waterborne diseases like Cholera.

The Zambia Body Building and Fitness Federation (ZBBFF) has expressed concern over the level at which the COVID-19 pandemic has impacted the bodybuilding fraternity. In...