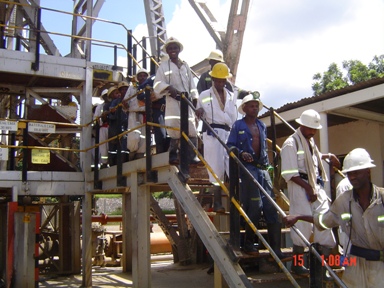 Government has said that Luanshya Copper Mines (LCM) has responded positively to the two letters it was issued last month concerning the re-opening of shaft 28 and the four mining licenses that were suspected not to be in use.

Minister of Mines Richard Musukwa  said that LCM has started putting in place the required materials in order to develop the resources at shaft 28 even as it is scheduled to re-open soon.

LCM Public Relations Manager Sydney Chileya clarified  that the four mining licenses which were given to the mine are all operational and not idle as the Ministry of Mines thought.

Mr. Chileya said that the mine is running Baluba underground mine which is using a different license as well as Mulyashi open pit mine which seats on another license.

He confirmed that all the seven mining licenses which were issued to the mine are in use.

The Public Relations Manager added that the mine’s license is vast and cannot be compared to other licenses as it requires enough time for surveying and investing before the operations.

Mr. Chileya explained that once shaft 28 is open, it will benefit the youths with employment and contribute to Zambia’s economy.

The Minister further urged the mine to be quick and optimistic about re-opening the shaft.

Meanwhile, Mr.Musukwa said that mining has the ability to improve people’s lives hence should be given priority if the country is to develop.

The mine  shaft has been closed for close to 19 years  due to lack of resources as well as fluctuation of copper prices on the international trade market.

The office of the provincial Minister in the Southern Province of Zambia has commended the Children’s Environmental Health Foundation (CEHF) on their continued efforts...