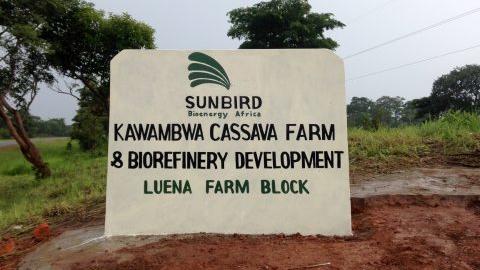 Speaking in an interview with Lusaka star, ZNFU President Jervis Zimba said the cassava out-grower scheme is a good move and it will give farmers an opportunity to diversify.

Mr. Zimba has however, stated that in order for the scheme to be fully actualized and sustained, Sunbird Investment should reward the farmers accordingly.

Zambia has got market for any crop grown but my appeal to Sunbird Investment is reward the farmers awesomely.

And speaking in a separate interview with the Lusaka star, Small Scale Farmers for Development Agency (SAFADA) Director Boyd Moobwe stated that the introduction of the cassava out-grower scheme is a strategic move.

Mr. Moobwe said the out-grower scheme should be rolled out to nine other provinces dotted across the country.

Meanwhile, Mr. Moobwe has called on government to extend the project to others provinces such as Southern Province which experience drought in some areas since cassava is drought resistant.

And Mr. Moobwe has since encouraged farmers to venture more in cassava production aimed at enhancing national food security.

The company targets to engage 20-thousand farmers by 2021 spending about 20-million dollars on farmers annually.

President Lungu says the cassava processing plant will be a game changer for Kawambwa and the country as a whole as it will increase household income levels.

Mr. Benette said his company will be providing farmers with seedlings and help with agriculture extension officers.

He said his company will start constructing the processing plant this year and set for launch next year with 1-thousand jobs targeted to be created.

Mr. Benette also noted that the company had quickly rolled out its operations owing to infrastructure development by government such as roads.

The Zambia Swimming Union (ZASU) Vice President Adewalo Grillo has revealed that the union will hold its first league gala in October. In an...