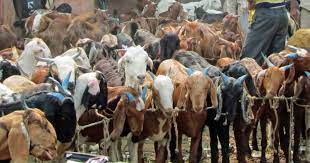 Small Livestock Association of Zambia (SLAZ) says that the country still has not developed the capacity to export one million goats to the Kingdom of Saudi Arabia.

In an interview with Lusaka star, SLAZ Chairperson Charles Malama  said the country only has the capacity to supply the local market as only four provinces are producing goats at a large scale.

Zambia would have been ready to export goats if at least over 7 provinces were able to produce and supply goats because they would be enough for both local consumption and export,

He further added that government should empower small scale  goat farmers  and cooperatives with an improved breed of goats in order to enable the country export goats of international standard.

When we talk of exporting goats, we need an improved breed of goats and work on the way the goats are branded.

There is a need for us to change how we brand our goats in that we usually brand goats the traditional way of using tattoos and goats branded in such a way can not be exported,

Last week,  an agriculture based research institute urged government to reconsider and work towards actualizing the export of goats to Saudi Arabia as a way of balancing trade between the two countries.

In 2016, the government of the Republic of Zambia and the Kingdom of Saudi Arabia signed a Memorandum of Understanding (MoU) for Zambia to export 1 million goats to Saudi Arabia.

Government says the re-establishment of Zambia Airways will not only help boost the country's economy but will also help create employment opportunities for a...