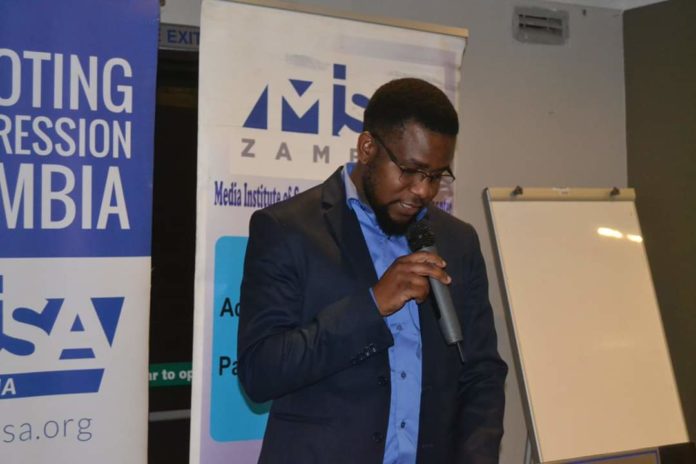 MEDIA Institute for Southern Africa (MISA) says investigative journalism in Zambia is slowly phasing out  due to the media harassment and intimidation journalists are facing in society.

Speaking during an Access to Information Policy briefing, MISA Vice Chairperson Hyde Haguta said journalists were encountering a lot of challenges in getting information from public officials because of bureaucracy and non disclosure tendencies by the office bearers.

“Public officials are holding information on behalf of the public not for themselves, and hence the need for a platform that will facilitate the smooth flow of information,” Haguta said.

Mr Haguta also noted for the need of the Access to Information (ATI) Bill to be passed into law as soon as possible to reduce the culture of secrecy among pubic officials.

He had also called on government to reconsider revisiting certain clauses in the legal framework such as Fake news, Defamation and Contempt suggesting that they were not well defined.

Meanwhile, media expert Dr Basil Hamusokwe expressed hope that the  Acess To Information(ATI) Bill would be tabled in parliament in 2019.

Dr. Hamusokwe observed that the current Minister of Information, Dora Siliya had intimate understanding of the importance of the ATI Bill because of her background in the media.

“There is hope that the Bill will be passed into law next year because government has also shown willingness to implement the ATI Bill,” he said.

Dr. Hamusokwe revealed that when enacted, the bill would bring transparency, accountability, sustainable development and inclusion of women in the decision making process.

Mrs Mwale said people would not remain behind in terms of information access if they had the Bill as the diving force.

She said the ATI once enacted would facilitate proper information circulation without leaving anyone behind.

The Super Division side Sensational Zanaco Football Club has sent its head Coach and his assistant on indefinite administrative leave following a poor string...