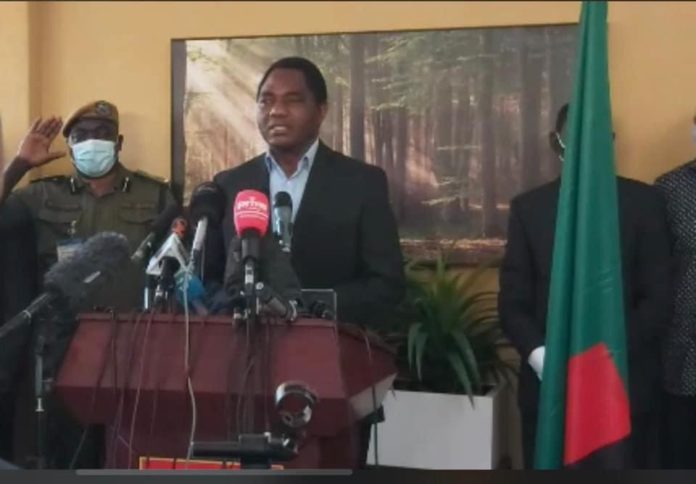 Zambia’s President-Elect, Hakainde Hichilema has promised to promote unity and the rule of law as the first step towards working for a better Zambia and reviving the country’s economy during his tenure as president.

Mr. Hichilema said this during his address thanking the nation for having given him, Vice President-Elect Mutale Nalumango, and the United Party for National Development (UPND) Alliance the opportunity to serve the country.

I thank you for your support. I pray we will be worthy of your trust. With the election behind us, let us come together as Zambians. One Zambia, One Nation,

The President-Elect reiterated the need for the country to put the past behind and come together as one Zambia, one nation and one people.

He added that he will be president of all Zambians irrespective of whom they voted for and will govern without fear or favour in order for unity, equality and inclusivity to prevail as this will be a priority during his government.

To those who voted for other candidates, we extend our hand, in friendship and respect. Though today you may be disappointed, I embrace you as your brother and servant,

The President-Elect added that elections are over and it is now time to move on beyond election partisanship and work towards revamping the economy and other sectors of the country.

My fellow citizens, we have an enormous task ahead to revive our economy and deliver on your expectations. The journey will be tough and challenging, but I am certain that with hard work and commitment, we will succeed in building a better life for you and your children,

Mr. Hichilema further added that his government will strive to eradicate corruption, maintain the rule of law and democracy and that everyone will be expected to operate within the confines of the law as no one is above the law.

He thanked fellow competitors for having participated in the elections and been gracious in conceding defeat and has pledged to foster a better democracy where their democratic rights are freely exercised.

The President-Elect has since urged all Zambians to unite and put aside their differences.

Renowned Malawian TV personality Geoffrey Kapusa, has called upon young people to embrace technology in their quest for answers related to HIV and...

ZAVA AGM TO HAPPEN ON MARCH 15