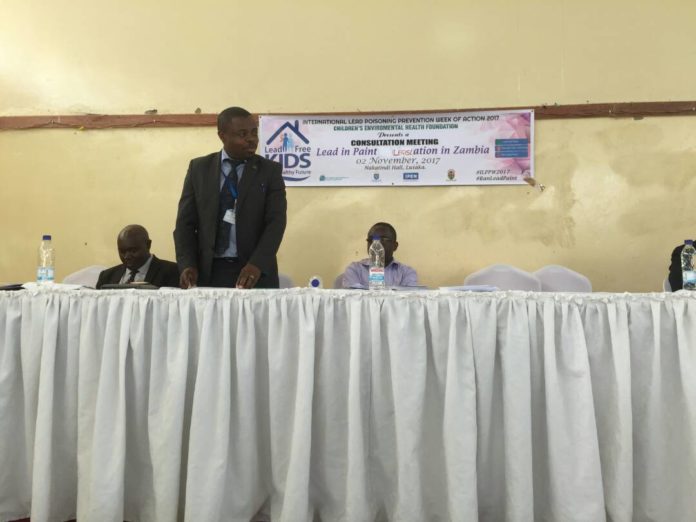 The Children’s Environmental Health Foundation (CEHF) recently conducted research in which they analyzed the levels of Lead in paint through solvent-based decorative paints sold in Zambia.

The Foundation discovered that nine out of 39 paints analyzed from 13 brands contained exceedingly high lead levels.

In a statement availed to the Lusaka Star, CEHF Chairperson and National Lead Advisor, Michael Musenga stated that all 39 paint labels failed to carry any consumer information about lead content.

“The health impacts of lead exposure on young children’s brains are lifelong, irreversible and untreatable. We are limiting our children and our nation’s future intellectual development, even though safe and effective alternatives are already in use and widely available,” he explained.

Mr. Musenga stated that there was need for a critical reduction to some of the sources of Lead exposure especially for young children.

She stated that children especially under the age of six ingest or inhale lead through exposure to dust or soil contaminated with lead-based paint.

Dr Brosché added that normal hand to mouth behaviour or when they chew on toys, household furniture or other articles painted with lead in paint easily exposes children to lead.

She said Governments should set mandatory limits on lead paint and paint companies should not until a statutory instrument is upheld to halt some of the processes that produce toxic lead products.

And Director of Department of Public Health, Environmental and Social Determinants of Health, Dr. Maria Neira for the World Health Organization (WHO) said that Lead in paint was a serious threat to the long-term health of our children.

She stated that lead in paint was still on sale in many countries and is used to decorate homes and schools.

The WHO Director of Public Health, Environmental and Social Determinants of Health urged countries across the globe to phase out lead paint by 2020 to protect the health of future generations.

Background: CEHF released Lead in Solvent-Based Paints for Home Use in Zambia report as part of the worldwide activities during the International Lead Poisoning Prevention Week of Action (ILPPWA) 22nd to 28th October 2017.

The Week of Action is co-led by UN Environment and the World Health Organization (WHO).

As a part of the Week of Action, IPEN also released Lead in Solvent-Based Paint for Home Use Global Report, a comprehensive review of lead in paint sold around the world, which finds that a quarter of all paints analyzed in 50 out of the 55 countries studied in Asia, Africa, Latin America, and Eastern Europe contain lead levels dangerous to children.

From September 2016 to March 2017, CEHF purchased a total of 39 cans of solvent-based, enamel decorative paints from various stores in Lusaka, Livingstone and Choma.

The paints represented 13 different brands produced by seven manufacturers. Samples from these paints were analyzed by an accredited laboratory in the USA for total lead content.

Nine out of 13 paint brands produced at least one paint with a total lead concentration above 90 ppm. Most brightly colored paints (14 out of 39 or 36 percent) contained lead concentrations greater than 90 ppm.

Zambia currently has no legally binding regulations to control lead in paint. Most highly industrial countries adopted laws or regulations to control the lead content of decorative paints—the paints used on the interiors and exteriors of homes, schools, and other child-occupied facilities—beginning in the 1970s and 1980s.

The strictest standard, 90 ppm total lead content in decorative paint, is common in many countries, including the Philippines, Nepal, India, Cameroon, and the United States of America.

Several other countries, including Singapore and Sri Lanka, have a 600ppm total lead standard. The WHO calls lead paint “a major flashpoint” for children’s potential lead poisoning and says that “since the phase-out of leaded petrol, lead paint is one of the largest sources of exposure to lead in children.”

Children are exposed to lead, when painted surfaces deteriorate over time and contaminate household dust and soils.

Children, ages 0-6, engaging in normal hand-to-mouth behaviours are most at risk of damage to their intelligence and mental development from exposure to lead dust and soil.

Lead levels in this study are consistent with the results of a similar paint study conducted by CEHF and the University of Zambia (UNZA) in October 2015.

In that study, forty-one solvent-based paints from different manufacturers were found to contain lead levels above 90 ppm. Similarly, a very high percentage of the paints in the former study (37 percent) contained more than 10,000 ppm lead compared to18 percent in the current study.

This indicates that in Zambia, levels of lead in solvent-based paints among some local manufacturers are still above 90ppm.

Key recommendations made in the report include: Government: The Zambia Environmental Management Agency (ZEMA) should immediately draft legislation that will ban the manufacture, import, export, distribution, sale and use of paints that contain total lead concentrations exceeding 90 ppm, the most restrictive standard in the world.

They should also require paint companies to display sufficient information indicating harmful contents on paint can labels such as solvents and provide warning on possible lead dust hazards when disturbing paint surfaces.

Paint companies that have shifted to non-lead paint production should get their products certified through independent, third party verification procedures to increase the customer’s ability to choose paints with no added lead.

Consumers: Paint consumers should demand paints with no added lead from paint manufacturers and retailers, as well as full disclosure of a paint product’s content.

Household and institutional consumers should ask for, consciously buy, and apply only paints with no added lead in places frequently used by children such as homes, schools, day care centers, parks, and playgrounds.

The paint study was undertaken as part of IPEN’s Global Lead Paint Elimination Project. CEHF, a non-profit making organization founded in 2011, supports sustainable environment and aims to see the standards of the environment, where the Zambian child and underprivileged families live, uplifted.

CEHF champions the protection of children and other vulnerable populations at risk from all forms of environmental health hazards and chemical threats that inhibit the development potential of children through professional execution of its plans, programs, and projects.

IPEN is an international NGO network comprised of over 500 organizations in 116 countries that work to reduce and eliminate hazardous, toxic substances internationally and within their own countries. (www.ipen.org)

There will be no Zambian representation at the 2019 Confederation of African Football (CAF) Awards after the women’s national team and its coach Bruce...