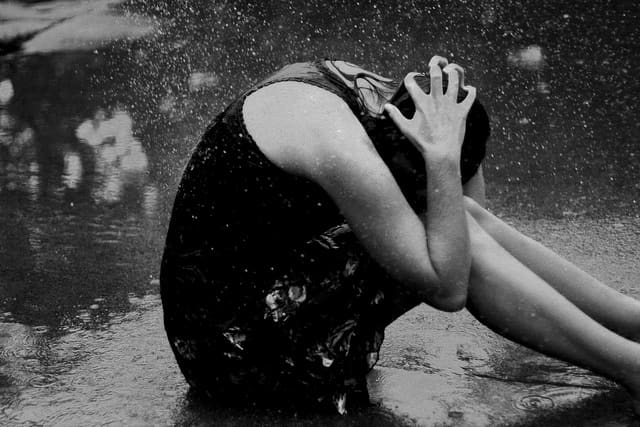 Introduced to bitterness of the world when a man took her priceless pride.
Took her virginity inside that Friday night when he raped her but couldn't stop him though she tried.
Forcefully yielded in the darkness her view got blurry-no red card refs,
Helpless with a scream, loud – yet more silent than an ants footsteps.

And now she is a woman, with a stolen heart and a broken past,
Wondering whether man is a man for the shadows of her story are all that last,
In her mind she questions her value and whether any man will ever accept her,
Broken pieces inside, glues and pastes can't put her together.

Consumed by insecurities, her view of men and life has been distorted,
Seeing every man as Lucifer himself with his angels- escorted,
For a moment of pleasure in sin tearing the heart of a young girl,
Raping out the life of an innocent soul for his fleshly pearl.

Standing in the rain, tears hidden and washed with it,
So nobody can really see her even though they look with a limit.
They limit their sight for they can't feel it unless they're in it,
Same journey, different shoes and races they're too focused on how to "win it".

She bleeds streams of blood, pools of lost value and worth,
Used and thrown like a worn and torn shirt written "annulling your birth".
Who cares about her? Nobody really knows her story,
You Can't really blame her coz everybody knows her as the "raggy old shorty".

She lies scared of who would believe her or even hear her,
Unsure of who would see through her torn "see through" heart and cheer her,
Scared of even reporting, thinking she could end up reporting to a man,
Huh.. The man stature only brings her the memories of….man!

And so she says;

Government has released k136 million to the National Road Fund Agency (NRFA) to dismantle arrears related to the ongoing construction of the Kazungula Bridge. Minister...