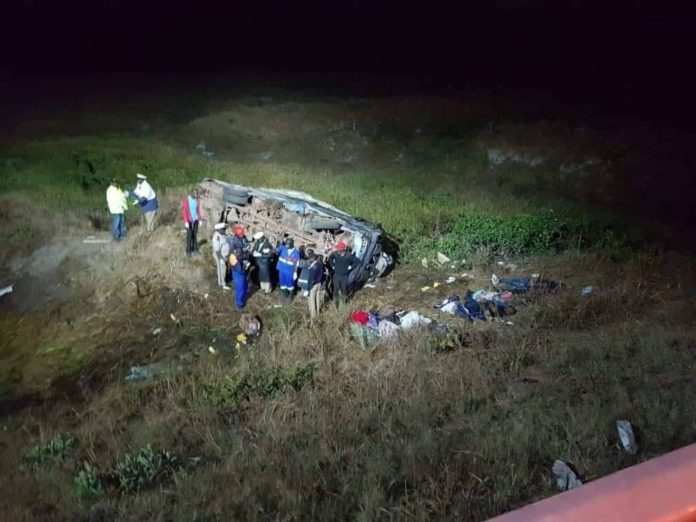 Six people died on the spot while 21 others sustained serious injuries in an accident which occurred yesterday 15th July, 2019 at about 17 50 hours at Mipundu Stream on Kitwe –Ndola dual carriage way. Among the deceased are two female and four male.

Involved was a Rosa Mini bus Registration number ADE 1511 which being driven by Moses Mususu from west to east (Kitwe to Ndola).
The accident happened when the driver of the mini bus lost control of the motor vehicle due to excessive speed and in the process fell into the stream.
At the time of this report, the total number of people on board as well as the identities of the victims had not yet been established.
The injured were rushed to Kitwe Teaching Hospital for medical attention while the bodies of the deceased persons are in the same Hospital mortuary.
In a related development a driver of a Toyota Port registration number ARB 800 identified as Thomas Phiri aged 34 of Chief Nyanje of Sinda district died on the spot in an accident which happened in the early hours of today 16th July, 2019 at about 01 00 hours on Great East Road near new Sinda Market within Sinda Boma.
Also involved was a stationed Truck and Trailer registration number AJE 2433 and BAJ 9112 ZM which was parked by Crywell Banda aged 34 years of Mungu Compound , Chipata District, who works as a driver for Ally and Sons Company who escaped unhurt.
The accident happened when the driver lost control of the motor vehicle due to excessive speed and careered off the road and in the process hit into a stationed truck and trailer and the motor vehicle got went up in flames hence the victim was also burnt. The remains of the body are in St. Francis Mission Hospital mortuary.

This was said in a statement availed to the Lusaka Star by Zambia Public Relations Officer Esther Mwaata Katongo.

The Chongwe Municipal Council has ordered Messr Construction Corporation to stop building a Chinese cemetery due to lack of permission from relevant authorities. Messr China...