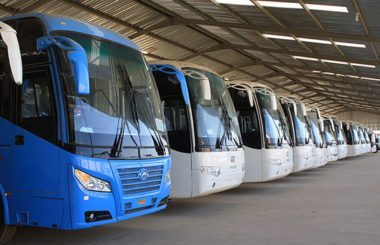 Youths in Lusaka have called upon government to allow them to run and manage the buses which were meant for youth empowerment and not the Madalaz company who claimed to be youths and mismanaged the buses because of gross incompetence, selfishness and greed.

Patriotic Front (PF) youth, Maxwell Chongu said it was unfair to state that youths failed to run buses meant for youth empowerment when it was clear that youths never played a role in managing the buses.

“It will be extremely unfair to say youths failed to run the buses meant for youth empowerment when it is clear beyond any reasonable doubt that youths never played a role in managing those buses as they were only used as a decoy by the selfish and greedy individuals who are way above the legal youth age masquerading as youths,” Mr. Chongu said.

He explained that the ruling government through the able leadership of His Excellency Edgar Chagwa Lungu thought it was wise to invest in the youths and create an opportunity to redeem youths from poverty after cushioning perpetual complaints which came from the youths directed to the government over lack of employment and business opportunities.

“A wise leader invests in the youth, because a nation with wealthy youths is a wealthy nation indeed. The buses are meant to empower us and I believe we have competent youths who can run those buses, empower, and employ fellow youths and clear the loan used to procure the buses,” Mr. Chongu said.

He further told the Lusaka Star that giving the buses to the private hand was not a solution as the process was going to dilute the intended purpose which is to see youths access both employment and empowerment.

He said that the private hand will only focus on remitting funds to clear the loan after which they will assume ownership of buses leaving youths wallowing in abject poverty.

“I am aware that Ministry of Youth and Sport has advertised those buses for private companies to run them on their behalf but my suggestion will be to halt the tender process and exhaust all the possible solutions on how best that project can be handled by making necessary consultations with all the stake holders mainly the intended audience,” said Mr. Chongu.

Meanwhile, a youth PF committee member and a student at the University of Zambia Jeremiah Munkombwe said that the buses must not be handed over to the private hands, rather the government should ensure that the buses are given back to youths, despite their political affiliation.

He called upon the National Youth Chairman, Hon. Steven Kampyongo to come up with a team that can run the buses and clear the loan.

“I wish to make my humble submission to our National Youth Chairman Hon. Steven Kampyongo to consider coming up with a carefully selected team that can be considered to run the buses and subsequently clear the loan regardless of our political affiliation,” Mr. Munkombwe said.

The buses were given to the youths as a way of empowering them and creating jobs.

Video Assistant Refereeing (VAR) like Goal Line Technology (GLT) is one of the latest additions to the popular sporting discipline known as Football (or...